The true cost of taking drugs on the body and mind 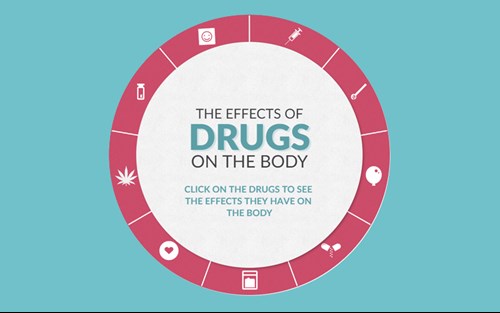 With the recent spike in tragic drug-related stories, the need to educate and raise awareness of the consequences of drugs has never been greater.

Drugs have seemingly become commonplace in our society, with the young focusing on the short-term physical effects of drugs, without truly understanding the real long-term, life-changing and even fatal consequences of drug use on mental health.

Effects of Drugs on the Body

Priory Group has seen an increasing number of young people who have developed anxiety and depressive orders as a result of drug use.

This interactive infographic aims to clearly and simply illustrate the detrimental long term and short term effects drugs can have on personal wellbeing and health.

This includes some of the more prevalent drugs, such as Cocaine, Ecstasy, Cannabis and Ketamine.*

By selecting a drug on the dial, the user will be told of the effects of this drug on their body, with relevant organs or areas on the diagram highlighted.

“I see an increasing number of patients, often only 18, who are not only addicted to street drugs but have developed significant depressive and anxiety disorders. Distressing panic attacks from stimulants and hallucinogens - synthetic or mushroom-based - are on the increase.

"I have also noticed an alarming number of cocaine-induced, severe paranoid states requiring admission to hospital. Unfortunately, as I say to patients, this paranoia may not be controlled by antipsychotic medication and may become a permanent state."

"Research from the Maudsley Hospital suggests that over 25% of chronic paranoid psychoses, i.e. those which don't go away when drug use stops, are marijuana-induced. Marijuana is continually being redeveloped to be stronger, and hence more dangerous. So the problem is worsening."

"Street drug users will almost always know someone in their peer group who has developed a significant mental health problem. This can be a timely warning to them."

It is hoped that this infographic will help trigger emotional and rational responses to the very real life-changing consequences that these drugs can have on a person’s life and encourage existing users to talk about their struggles with those that can help.

In a culture where many people take both legal and illegal highs recreationally, it is hoped that this asset will help deter or even stop an individual’s usage of drugs.

Heroin is one of the most dangerous drugs in circulation. It is highly addictive and comes with serious health risks. Immediate side-effects can include a sense of wellbeing and relaxation as well as dizziness and vomiting. Long-term consumption can lead to collapsed veins and loss of body tissue - especially in fingers, toes and limbs.

Users will often feel alert and awake which can result in an agitated, aggressive and confused attitude. Consumers often also report a reduction in appetite. Heart rate and blood pressure can become elevated, risking a heart attack. Long-term abuse of methamphetamine has also been found as a contributor to panic attacks, psychotic episodes and brain damage.

Users can feel a sense of relaxation, happiness and euphoria after inhaling ‘laughing gas’, as well as feeling dizzy and experiencing hallucinations. Risk of death is high with laughing gas, as nitrous oxide restricts the flow of oxygen to the brain. Regular consumption can lead to significant nerve damage, causing tingling, pains and difficulty walking.

Since the Psychoactive Substances Act came into effect in May 2016, many ‘Legal Highs’ are now illegal for human consumption. These include "Clockwork Orange", "Blue Cheese" and "Spice". Research shows that consuming these drugs initially creates feelings of relaxation and euphoria, but can lead to hallucinations, anxiety, suicidal thoughts, confusion, aggression and seizures.

Cocaine is a highly addictive drug that raises the body’s temperature, makes the heart beat quickly and can lead to overconfident and even aggressive behaviour. These effects can last for up to 30 minutes on average, dependent on the quantity consumed. Long-term use can damage the kidneys, blood vessels and cause nasal perforation.When the immediate effects wear off, users can experience a ‘comedown’ for days afterwards, with feelings of depression, anxiety and paranoia.

Ecstasy users can find they become more energetic, confident and talkative, with music and colours feeling more intense. They can also experience periods of confusion and episodes of lockjaw. During the ‘comedown’, users report a sense of feeling down, muscle aches, headaches, dizziness, dehydration and nausea. Ecstasy has been linked to negative mental health consequences as a result of sustained use, such as disturbed sleep, psychosis, panic attacks and anxiety.

Cannabis users can feel more relaxed and happy, but can also feel light-headed, faint and sick. This can then progress to feelings of anxiety, paranoia and panic, with persistent use worsening the latter symptoms. In some cases, continued use has been linked to the development of psychotic illnesses, particularly in those who are genetically vulnerable. Other side effects include an increased appetite and lethargy.

A feeling of ‘floating’ is a common effect of Ketamine consumption. Dependent on dosage, this will generally last for up to 30 minutes, but there are further long-lasting effects including difficulties with speech and movement as well as possible feelings of detachment from the body. Hallucinations are common, as well as feelings of restlessness and anxiety.

As well as users experiencing hallucinations, the passage of time can feel much slower or faster when taking LSD, with physical objects appearing distorted. Users can also experience flashbacks to ‘bad trips’ months and even years later. Long-term use can exacerbate or contribute to mental health problems such as anxiety and depression.

To discuss how the Life Works team can help to support individuals and families dealing with addiction and for further information on treatment and rehabilitation programmes, please call: 01483 745 066 or click here to book a FREE ADDICTION ASSESSMENT.

Book a Free Confidential Assessment at Life Works in Surrey.